Looking for a sponsor for Richard 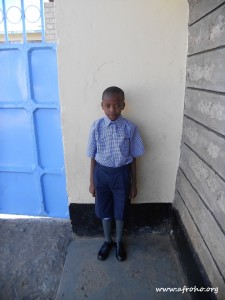 Richard Muteti has no permanent sponsor at the moment. From one-off donations we already paid roughly HUF 24.000 for his school fees this year. However to ensure that he can stay in the school (and in the rescue home) for the whole year he needs more supports.

Richard’s parents have died and not any relatives were willing to take care of him and his sister (Eunice Bahati), thus he became a street boy. The school found a foster mother (Jacqueline) to provide lodging facility and take care of his general upkeep. Unfortunately, the health of Jacqueline deteriorated due to asthma disease and Richard had to be rescued to come and stay at the rescue home. Despite being a former street boy he is average in class, which is a great result.

Richard is in class 5, he wants to be an architect and he likes drawing pictures, especially houses. He generally loves doing art work.

If you would like to help Richard by any amount or you wish to symbolically adopt him, please contact us at [email protected]. Thanks a lot.