Note: this report was written to inform our Finnish and Australian partners, however we thought it worth publishing as our supporters can be interested in the visit to and experiences in the bushcamp.

Every year – for 15 years now – the Dutch organizations called Wings of Support is organizing a camp – or as they call it, a bushcamp – in Naivasha, Kenya for needy kids from all over Kenya. Wings of Support volunteers – all KLM (current or retired) employees – stay there for several weeks and kids from different Kenyan schools (all supported in other ways by Wings of Support as well) arrives in turns for couple of days.

This year I had an opportunity to visit the camp when kids from our Nairobi partner school – Boston Schools Matopeni – were there. Moreover I had the opportunity to meet one of the founders of Wings of Support which was a great pleasure for me as Wings of Support do so much for needy kids and specially for “our” kids in Boston.

I was told that arriving and leaving days are not the best for a visit being those days a bit hectic – 36 very excited kids are arriving and other 36 are leaving at the same time –, so finally I spent the remaining two days in Naivasha, and even in those 2 days I did not spend the whole day(s) with the kids, I was rather popping in for some programs.

We arrived to Naivasha on Thursday afternoon (kids’ second day of the camp) and after checking in the very same camp (though a different part) where the kids stayed, we went to look around in the campsite. That day kids had a very busy day: in the morning they had a boatsafari on Lake Naivasha, then they went for a safari (by vans) nearby and in the afternoon they had a movie in the campsite. So as most of the kids were watching their movies when we arrived, we walked around the campsite with our Dutch friend, Nelleke (who invited us to the camp) and one of the girls (who was not much interested in the movie and rather spent her time with the (Mzungu) adults :-). 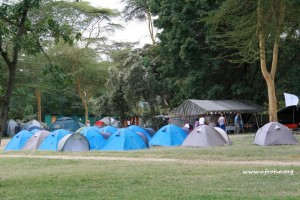 In the campsite they are around 15 small Igloo tents, each named after a Kenya animal (e.g. elephant, giraffe, impala) and usually 2 or sometimes 3 kids (one or two older and a small one) were sharing a tent.  Tents for adults’ (volunteers’ and teachers’) are just next to the kids’ ones from lake side (to make the camp even more safe). There is also a big communal tent and there are several bandas on the site as well, which are mostly used as storage places. Actually, this camp need lots of storage places as they have lots of clothes and shoes to be distributed, as well as toys to play with…. For the whole year KLM staff are taking extra luggage on their flights to Kenya and bringing all those clothes, shoes and toys for the camp.

Upon arrival all the kids get some clothes and shoes (as they hardly have other than their school uniform) and they also get a small “toiletry pack” with soap, toothpaste/-brush, towel and a torch. However, even during the camp kids can get everything they need from the so-called “campshop” (it is not a real shop as kids of course do not need to pay, but they can get more clothes or small other stuffs for free). We have seen lots of clothes, shoes and toys in the camp, some of which will surely be left even after all the camps (four this year) are finished. What is left (cloths, shoes, toys) will be distributed among the schools at the very end.

There are 36 kids, twenty-something volunteers, 2 cooks, 2 teachers (at least from Boston there were two) and 2 night guards in each camp and the camps are fully self-contained. Cooks are cooking and volunteers help to prepare the food (e.g. peel potatoes) and do the dish-washing, but they also participate in the programs and play around with the kids. During the night, if kids need to go out (for washroom), they give a sign by zipping their tents several times and volunteers – who stay around the camp fire for the whole night – escorting them to the washrooms.

There is also a bushcamp doctor who retired from KLM as well (as a doctor) and spends a month in the bushcamp every year (i.e. 15 years now). He is there to check and advise on kids’ health, to treat minor health issues and – if necessary – to take the kids to a nearby medical post. (The post is originally for the Dutch farmers who grow roses and vegetables around Naivasha but the bushcamp doctor is also allowed to use the post if it is necessary. With so many kids – around 150 every year – he sometimes has to visit this post with one or more kids.) 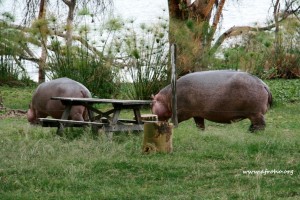 Hippos sometimes climb out of water and graze around the camp, however there is an electrical fence to prevent them walking into the camp. (On the afternoon of our arrival they were two hippos out from the water and grazing around just next to the fence. It was a great experience not only for the kids but even for the adults as well.)

Once the kids finished their movie and came back to the campsite there was some free time (before dinner) for them to play around. Some were playing footballs (mostly boys, though even girls like playing football, moreover the school has a football team for girls as well) or badminton, while other were playing by the tables of the communal tent (making jewelleries, playing cards, colouring books or playing with small toys like cars or building bricks). I also joined a table for playing Halli Galli (played with cards where in certain cases you have to ring the bell) which the kids enjoyed a lot.

Next day (i.e. on Friday), kids went for a walk on Crescent Island. This island is in Lake Naivasha famous for habitating herbivores only, so it is very safe to walk around and see some wild animals (like wildebeest, buffalo, Thomson’s gazelles and other antelopes, zebras and giraffes) from very close. Though that day it was very sunny and hot (though some rain arrived in the afternoon) kids really enjoyed the walk. Most of them have never seen such animals live (despite the fact that they live in a country where these animals can be found living freely in many national parks). 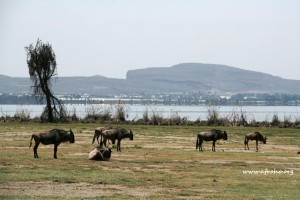 In the afternoon kids had special play, the Olympic Games of the Bushcamp (like small competition) which they enjoyed a lot as well. However the best program (for both the kids and the volunteers) arrived in the evening, when there was a performance and party night. Both kids and volunteers were to performed some little play for each other. All of them put on some fancy-dresses and some of them had funny wigs as well and all the kids have had their faces painted. Kids performed a traditional plain nilot (plain nilots include tribes like maasai and samburu) dance with lots of jumping. Kids were jumping all the time like for 10 minutes without a stop. It was amazing!  Their teacher (a man) was also great! He performed with them, jumping as well all the time and he was very enthusiastic. By the end kids – of course – could hardly breathe, but they were very happy. You could see that they were enjoying the performance night and performing a lot. (And – as I learnt for Shelvin – the kids were practising the dance every night. Can you imagine who much jumping does that mean?! After all those programs during the day… Wow!) After the performance were finished a party (discotheque) started, so the kids could dance a bit more and have more fun.

Shelvin – by the way – is one of Boston Primary’s students, who – thanks to sponsors – had an emergency heart surgery two years ago. Fortunately, at the moment he is in a very good health. Though sometimes he gets tired and he can’t run or climb up a hill (especially if it is as hot as it was these days),

he could participate in almost all the programs (except of course the jumping dance) and he was really enjoying the camp.

All in all, kids seemed to enjoy the bushcamp a lot and I think it is a very good opportunity for them to experience participating in a camp, as well as being on holiday. In addition they can learn more about their country and about its nature and wildlife as well. We – who do our best as well to help these needy kids – can’t be more grateful for Wings of Support for organizing this camp and inviting “our” kids as well from year to year. We really hope that this camp will continue and many of other Matopeni slum kids will be able to participate in it.

However, there is something else that we learnt in these two days (as Nelleke shared her experiences with us): of all the schools participating in this program, Boston kids are the most well-behaved and the most open kids (even in the beginning they are not shy and they are able to talk not like kids from other schools), in addition Boston kids are the only ones who help each other with everything (e.g. bigger kids are helping the young ones to put on clothes or brush their teeth.

I think this is a great achievement of the school. Beside the very good academic results (the best in 48 school in the region), they grow nice people who can work together as a community, and I think this as important (even not more) than good academic results. Congratulations to Stephen and all of the Boston staffs. I believe that this should reinforce us as well in what we are doing and it also proves that – even if it is not always easy – all our efforts (and money) go in the right place and if any school, then Boston deserves our help.

To see more pictures taken during our visit click here.